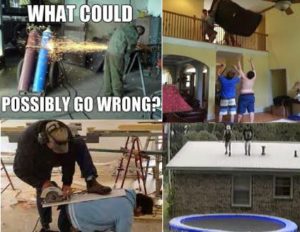 Have you seen a dumb decision being made by someone?

Isn’t your first thought: What were you thinking?

But, I also have a second thought: How can I avoid a bad decision? …so others don’t think the first thought about me. 🙂

Here are 5 really funny, but dumb decisions that prompt the first question.

… then I want to show you 2 ways to avoid bad decisions in the future.

What Could Possibly Go Wrong? 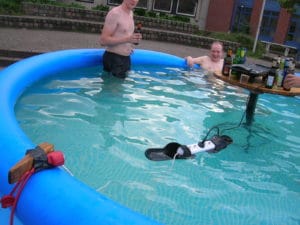 While they were in it.

I am a fan of beer, convenience and good music (the table in the middle contains beer and has a music player plugged in)

… but really, is this a good decision?

Hitting a golf shot by using your buddy’s butt crack as a tee? Really? 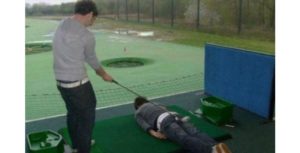 Ahhh, wait a minute. These are teenagers. Science reveals that teenagers don’t have (yet) a fully developed pre-frontal cortex in their brains.

That simply means they often have an inability to fully judge the risk inherent in a situation.

Wait… in the image above this, the guys in the pool look older than teens. Well, their bodies are older anyway. 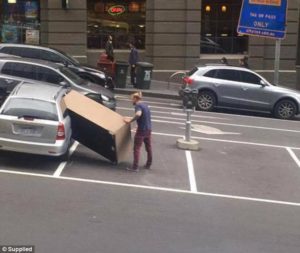 Here’s a guy that can’t see what everyone else can see.

“I know I can make this fit… just give me a little more time!”

Buddy, all the time in the world isn’t going to help.

Do I dare say it? Should we allow people like this the right to vote?

Ok, I am being harsh. I too have made decisions that in hindsight made me look like I wasn’t “the sharpest knife in the drawer.”

Let’s at least give him credit for persistence.

This idea must have seemed brilliant to someone.

I can hear it now.  “I have an idea! We can save ourselves a lot of work by using a homemade catapult to send this TV up to the third floor…”

Note: the others had to agree to this (so no finger pointing here)

Ideas are only good if they actually work. I’d put this into the same category as do-it-yourself braces for your teeth. 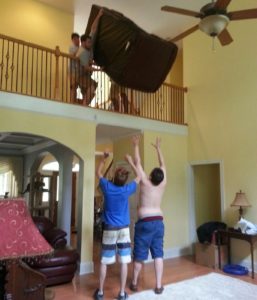 It doesn’t take a rocket scientist to see this is a disaster waiting to happen.

Ladies, doesn’t this strike you as gender based idiocy?

As a male, speaking on behalf of my gender, I will admit it. We sometimes (Ok, frequently) think we can do something just by brute force.

If we are honest, many times we men have used the infamous phrase:

“We’ve got this!” (especially when someone dares to question our plan).

Only later do we admit “maybe we don’t”

Surprising Outcomes For Some Decisions 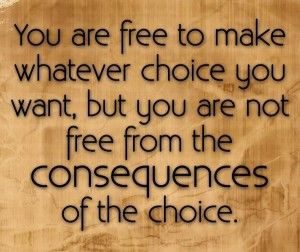 The above decisions fall into the category:

*Foolish, short-sighted, not thought out 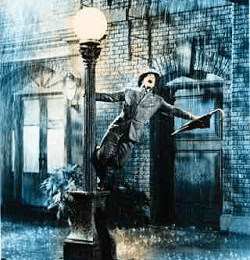 Wouldn’t it be great if regrettable decisions were limited to ones born out of stupidity or foolishness?

Sadly, there are plenty of decisions you and I have made that seemed like a good decision at the time (or least not a bad one), but later we are surprised how badly our decision turned out.

For example, remember the iconic scene with Gene Kelly in “Singing in the Rain?”

How could that be a bad decision?

“Hey! Look at me… I am carefree like Gene Kelly!

I don’t have a care in the world!”

No One Saw This Coming

Has something like this happened to you? I have made plenty of decisions that seems innocent enough at the beginning, but then later I look back and think, “What just happened? How did this turn out so badly?”

Maybe you made the decision to go to work at some company, or start dating someone… and everything looked great.

No warnings from friends that it was a mistake.

Then one day you realize you are in an awful place… and it isn’t getting better.

You kick yourself for going down that path in the first place.

One Reason These “Bad” Outcomes Happen 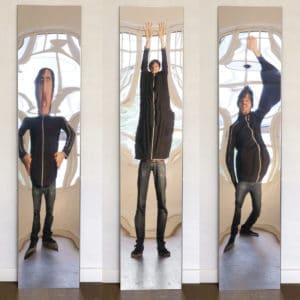 One problem with decision making is that the “facts” upon which we make our decisions are subtly distorted.

Did you catch that?

You are looking at the situation through a warped lens… and making decisions based on what you are seeing.

The unseen distortions impact us in so many ways:

If we are making decisions while looking through a distorted lens, is it any wonder we make bad (dumb) decisions we later regret?

Download the infographic to the right and learn about 50 of the most common, and problematic distortions affecting your decisions… and how to fight them.

Knowing what’s really going on (unseen to most) is the first, most important step to doing something about it.

What Research Is Revealing About Making Better Decisions

Research is also helping us improve our decision making process. We have discovered that the way we often make decisions is flawed.

In other words, even if you are careful, thoughtful and deliberate, your decisions can turn out badly.

That is discouraging, isn’t it?

But, there is encouraging news. We now can increase the odds of decisions turning out well… by using a different process.

Click here to read about 16 ways you can dramatically improve your decisions [research-backed].

It contains 16 different free resources that you can use to make better decisions:

Click here to visit this better decision resource page and read about 16 ways you can dramatically improve how your decisions turn out.

YOUR TURN! Leave a comment below: What is the funniest “dumb” decision you ever saw (or made)?