Stop and think for a minute.
Are there people in 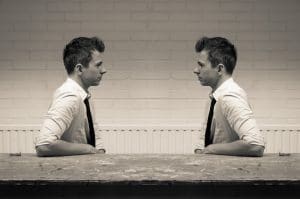 your world
with whom you’d like to experience a better connection?
Maybe even have them see you in a more favorable light?

One highly effective method to increase your connection and influence with people around you is to use the misunderstood relational superpower called empathy. (For more on this effective approach, see the article entitled, Empathy: an “Attractive” Quality That Boosts Your Influence)

A second method, called the mirror technique, can also help you increase connection. By mirroring others, the technique taps into a quirk in our brain (called mirror neurons), discovered by neuroscientists.

What’s great about the mirror technique is that anyone can do it, and its effects are quickly seen.

Do you want to make more and better friends wherever you go? Then read on!

What Are Mirror Neurons and How Can They Help My Relationships?

In the early 1990s, neurophysiologist researchers at the University of Parma in Italy discovered what they termed “mirror neurons.” They noticed that certain areas of the brain were being activated in similar ways… whether the subject was actually doing a certain motion, or just witnessing that motion.

Then, in 2010, behavioral scientist Simone Kuhn and her colleagues confirmed in their research that when a person is being unknowingly imitated, that person develops “positive feelings toward the imitator.”

Bottom line: something inside our brains is triggered when we witness certain activities that correlate to our own current or earlier activities, moods or attitudes. That reaction often includes having positive feelings for the imitator.

Skeptical about the power of mirroring someone? Keep reading.

How Mirroring People Can Benefit You

The positive effects of mirroring another person’s mannerisms and moods are well established. Just a few examples:

There is something in our brains that interprets an imitator more positively than someone who doesn’t mirror our actions.

I know. Weird. It seems like voodoo. But, the results are undeniable.

The Good: Mirroring others has a very positive effect on the imitator, not just on the person being imitated. When you focus on what others are doing, saying and feeling (so you can mirror them), who are you focusing on? Them. Who are you NOT focusing on? Yourself.

That is hugely important because we are all guilty of interacting with others, but our focus is on what they think of us, what we are going to say next, etc. To be self-forgetful because you are intently focusing on the other person is a powerful positive force in relationship building.

The Bad: Mirroring does, however, have a potential dark side. You can manipulate others for your own purposes. Thankfully, this outcome is mostly in the short-term. Longer term, people will see through your efforts and you will be viewed in a very negative light.

So, do yourself (and everyone else) a favor: act in accordance with the golden rule and treat people with honor and respect. Use this superpower carefully… and with benevolence in your heart.

The Beautiful: The potential misuse of mirroring doesn’t mean you can’t leverage this brain quirk for good.

For example, I’ve got a good friend in my world who is sometimes hard to love… and not receptive to hearing about things they can’t see (but need to know).

It would be far easier to write them off. Instead, why not increase my likeability in their eyes, so they can more readily receive my love AND the truth they need to hear?

If you genuinely have a desire to have a more favorable connection with someone (especially so you can be a blessing to them), then how exactly should you mirror them to improve that connection?

3 Keys to Mirroring Others to Connect More Effectively

One final movement key: identify and use the person’s punctuator. You will often notice the person’s favorite and frequent gesture they use to accentuate a point. It can be a fist pump, animated hands in the air, raising their eyebrows, etc. This is their unconscious way of communicating “this is important.” When you also use it, the other person feels more understood.

For example, Todd Fonseca tells of this fascinating encounter:

Once when I was having lunch with a physician who was pitching a public, private and institutional partnership, I noticed that when he was particularly adamant about an issue, he would bring both hands in front of his body and thrust them vigorously up and down.

As he spoke, I prompted him on by nodding in pace with his plea and when he came to his conclusion, I mimicked his double-handed gesture as he made it himself. He stopped, looked at me, cocked his head and said “Yes! You understand it completely!” and smiled with a nod.

How Mirroring Others Can Impact the World for Good

I don’t know about you, but I like feeling understood and listened to. To help others experience this is a gift you can share with them.

Sure, in the short-term you can misuse it to manipulate others into liking you more or giving you what you want (until you are exposed). But, if you see it as a gift and have the right motive (blessing others), then this simple technique is a quick, effective way to better connect with others.

In a world where most are in a hurry and settle for superficial human connection, you can use mirroring and the misunderstood superpower of empathy to more deeply connect with others.

They will love you for it.

How would you use mirroring in your relationships?