Has this ever happened to you? 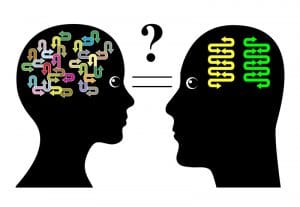 Someone is telling you something…
and you ask a clarifying question to make
sure you are tracking with them.

“Are you saying this? Or that?”

Then, they seem to get impatient with you,
and send you (verbally or non-verbally) a
dummy message.

It can be a slight head shake or a sigh/huff, or just an incredulous look of “Is being stupid your profession, or are you just gifted?” Any way they communicate it, the message is clear: they think you’re an idiot.

There is no doubt being on the receiving end of an “idiot” message is painful. I hate it.

Now, let’s be honest. I think we have all been on the sending side of a dummy message, too. I know I have. Too often I can get impatient with people who don’t understand what I am saying.

Here’s the thing: if you understood the WHY behind that impatient reaction (theirs and yours), you wouldn’t do it to others as often. Plus, when they do it to you, you wouldn’t take it personally because you know what’s going on.

It all has to do with what researchers call The Curse of Knowledge.

I’ll admit, when I learned about it, I was both astonished and perhaps for the first time understood why humans so easily and often misunderstand each other.

Discovering The Curse of Knowledge

I first learned about the concept of the curse of knowledge from the excellent book Made to Stick by Chip and Dan Heath. Side note: All four of their books are outstanding.

The concept was documented by researcher Elizabeth Newton, who conducted a series of experiments using a simple game: tapping out the tune of a well-known song that others have to guess.

Here is an excerpt from Made to Stick that explains what happened next:

“Newton assigned people to one of two roles: “tappers” or “listeners.” Tappers received a list of twenty-five well-known songs, such as “Happy Birthday to You” and “The Star Spangled Banner.” Each tapper was asked to pick a song and tap out the rhythm to a listener (by knocking on a table). The listener’s job was to guess the song, based on the rhythm being tapped.“

Ok, it sounds pretty simple and straightforward, right? Well, this is where it gets a wee bit interesting. Again, from Made to Stick:

“The listener’s job in this game is quite difficult. Over the course of Newton’s experiment, 120 songs were tapped out. Listeners guessed only 3 out of 120 songs (2.5%).

But here’s what made the result worthy of a dissertation in psychology. Before the listeners guessed the name of the song, Newton asked the tappers to predict the odds that the listeners would guess correctly. They predicted that the odds were 50 percent.

The Wide Difference in Perception

What is going on here? If I tap out a well-known song that is as obvious as the sun in the sky, why can’t the listener understand it? 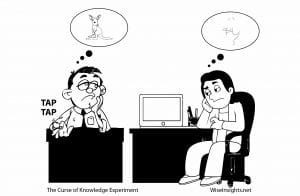 Here’s what the researcher realized (from Made to Stick):

“When a tapper taps, she is hearing the song in her head. Go ahead and try it for yourself — tap out “The Star-Spangled Banner.” It’s impossible to avoid hearing the tune in your head. Meanwhile, the listeners can’t hear that tune — all they can hear is a bunch of disconnected taps, like a kind of bizarre Morse Code.”

Do you see why the sender of the communication (the tapper) gets so exasperated? They are thinking, “How much clearer and more obvious can I make it? How can you guess Happy Birthday instead of The Star-Spangled Banner? The problem has to be with you… you are just stupid! 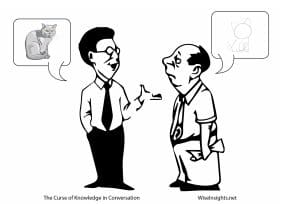 This dynamic occurs to some degree in virtually ALL communication. The sender “sees” a specific image (in their mind) as they communicate their message, but the listener actually receives an incomplete message.

This reality explains why miscommunication is so common. What the sender of a message knows and is seeking to communicate is rarely transmitted as clearly and thoroughly as it is in their head.

What can we do about this reality? Here are two ways to handle this dynamic, depending on which side of the misunderstanding you are on.

When someone gets frustrated or even contemptuous toward you because you don’t “get it”, remind yourself of what is going on.

Because it is clear to them, they think it should be clear to everyone. It isn’t. So don’t take it personally or own their negative reaction. It’s not your fault.

Be understanding- they are blind to what is going on. To them, the message is crystal clear, and they don’t understand how you could misunderstand it.

Of course, there may be other factors at play… the other person’s insecure need to feel superior (so they denigrate others who aren’t as “smart” as they are).

Do you see how BOTH these reasons have little to do with you? Don’t own the dummy message.

Instead, step outside of yourself and recognize the inherent frustration the message sender is feeling. Calmly work with them to resolve the disconnect… while smiling to yourself because you really know what is going on.

2. When You Get Impatient with Others Who Don’t Get It.

It’s going to happen to you. There WILL be receivers who do not fully understand what you are communicating. It doesn’t matter how careful you are to communicate your message.

You think by slowing down your “tapping” or emphasizing certain “notes,” you are making it as clear as day. It isn’t. Accept that.

Instead, recognize what is happening and be patient. Tell yourself, “I am not being as clear as I think I am…”

Then, try communicating in multiple ways to fill out the picture.

Different ways of communication can help fill out the picture.

Also, use face to face communications whenever possible. Emails and text messages are very easily misunderstood because you can’t hear the tone of the message… just the words.

Remember, communication is a process, not a one-time event. It includes all sorts of nuances that can’t always be seen at first. Patiently help others see ALL the dots in your head.

Now that you know this truth, how will it change the way YOU send and receive communications? Leave a comment below!

One thought on “The Curse of Knowledge & Misunderstandings”